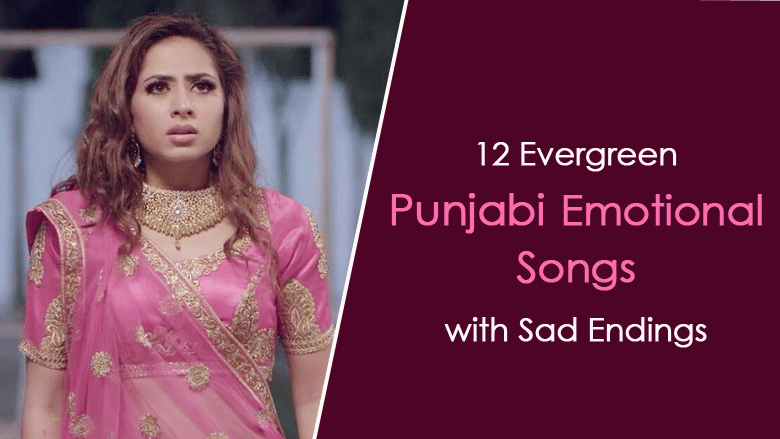 There’s nothing more pacifying than Punjabi emotional songs. Whether it’s a post-break up, tear down or a bad day, music entails the best mode to roll out the emotions. Also, sad songs have the power to evoke positive feelings of peacefulness and nostalgia. Furthermore, it allows to find a spirit of consolation during tough times. Lucky for everyone, there some real good Punjabi sad songs out there that accord your mood to repose. Listen to our amazing playlist for the saddest songs of all time, and prepare for an onset flow of emotion.

Qismat song depicts the pleasing love and  heart-aching separation between the lead couple. The girl ditches her wedding ceremonies (with someone else), and ran off to his love only to see him watching marrying to some other girl. While Ammy Virk is the singer of the song and Jaani serves as the lyricist. Furthermore, the song turns out to be a massive hit that it later got released as Qismat movie, starring the power couple Ammy Virk and Sargun Mehta.

Vich Pardesan showcases the immense love of the beautiful married couple. Their life goes smooth and joyful unless they break into bits when the husband gets killed by the goons in front of his wife. Featuring Jassi Gill and Neeru Bajwa, the song is sang by Jassi Gill. The words are penned by Sucha Minto. Moreover, the song has garnered a lot of appreciation because of its warmth music and connecting lyrics.

Paani is a very heart-soothing Punjabi song that displays the breach of the trust in the love relationship where a girl betrays the boy. Featuring Yuvraj Hans and Yuvika Chaudhary as a lead pair, it is sung by Yuvraj Hans and written by renowned lyricist Jaani. In addition, the song has received accolades for its fine words and fascinating music.

The soul-stirring song is presented by Bhushan Kumar and T-Series. The romantic song of 2019 exhibits a journey of two people who are in immense love. It further highlights the power of love and commitment to each other. Zindagi Di Paudi is sang by Millind Gaba feat. Jannat Zubair.  Featuring Milind Gaba in the lead, it is penned by Nirmaan.

Supna Laavan Da demonstrates the heart-wrenching love story when an army person promises to marry the girl. The latter awaits eagerly, but the boy dies at the border combat. Consequently, the girl ends up her life. Nimrant Khaira serves both as the lead as well as the singer in the song. Also, Preet Hundal penned down the words.

Joker shows a heart-touching story and life of a clown or joker is represented by Hardy Sandhu who crooned it. The lyrics are written by Jaani while B Praak gives the music.

Haaye Ve is an enrapturing track for all those who love their beloved people wholeheartedly, but unfortunately destined for heartbreak. Ammy Virk is the singer of the song while Raj Fatehpur pens down the captivating words.

A heart-aching love song where two young people who love each other part ways when the girl’s parents marry her somewhere else. The latest Punjabi song is crooned by Ranjit Bawa, who has also featured with Himanshi Khurana in the video. The music is given by Jassi X while lyrics are penned by Jassi Lokha.

It is truly an endearing song that puts forth a strong message, the only way the love can endure a lifetime only if it’s unconditional. Featuring Himanshi Khurana and Hardy Sandhu as the main lead, the song is sung by Hardy himself. B Praak and Jaani are associated with music and lyrics, respectively.

High on emotions, Yaar Mod Do rolls out the message that nothing on the planet is prized than true friendship. Guru Randhawa and Millind Gaba have not only given their voice to the song, but have written the lyrics as well. Music is given by Millind Gaba.

The emotional song Kalli Nu Mil Mittran is based on true love that falls prey to a social evil of honor killing. Ravinder Grewal has sung the song while the lyrics are written by Bechint Amlewala.