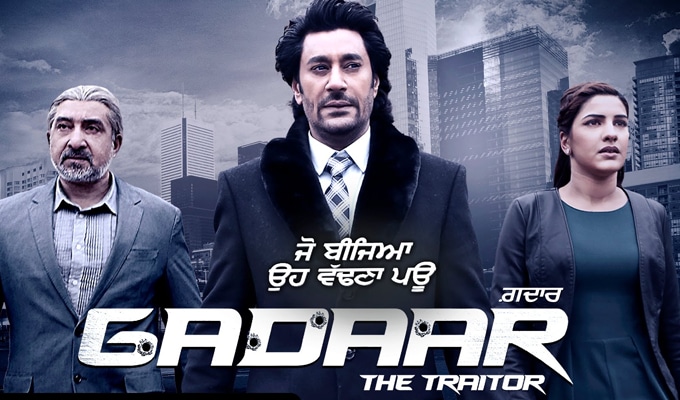 The Most awaited movie of 2015 Gadaar – The Traitor has been released last Friday worldwide in the theaters. The story is based on the punchline “Jo Beejya Oh Wadna Pau” which comes up with the subject and let us explains in detail what happened in the movie and more. So keep reading with us!

Story
A story of the movie mainly based on the Jai Singh character who reside in Canada but always thinking about his past in Punjab. Being Canada’s rich businessman, Jai Singh constantly found himself fighting with the loneliness and living a risky life. According to story “Jai Singh,” return to Punjab where he met with the black days of life and movie entered in the phase of 1984 Punjab in which killing of innocent people by police officers and politicians featured. The tag of Gadaar on Harbhajan Mann has suspense in the story which you guys can break only after watching a movie.

Acting
It’s a wonder to see first time Harbhajan Mann played a unique role and different character in the movie whereas on the other side Bobby Sandhu seen in the role of secretary which he implemented beautifully with Jai Singh. Miss Australian Manpneet Grewal gets a full chance in the movie and played an important role from the begging to till the end. Manpreet worked significantly well as an agent of Intelligence agency in Canada. Other characters like SSP, Jhilmil Singh and family members of Jai Singh also performed by professional actors from the industry. A character of Jhilmil Singh is worth watching which you can enjoy in your  near cinemas.

Direction
If we talk about the direction of the movie it was perfectly matched with the situation and scenes. Subject of the movie seems old, but the way Amitoj Mann executed the project was totally wonderful and in professional manner by giving different characters time by time and no one can judge how movie has been affected by so many people. The movie is filled with suspense at every stage. When you get a chance to watch a movie your eyes will stop blinking because the direction in the movie shouldn’t give you an opportunity to move yours neck even. Sounds cool! But some scenes might create confusion when did Jai Singh came from India and how? Overall movie is worth watching and director’s efforts make it more successful.

Music
Gadaar Movie has 3 tracks continue till the end of the story. Track 1 Gadaar Hai Gadaar played in the starting which introduced the character of Jai Singh and 2 more includes sad and cultural songs. Even music and song of the movie performed under professional artists like Dr. Zues Ft. Fateh Doe, Bhoomi Trivedi, Harbhajan Mann, Gursewak Mann. The scenario shows a good impact on the public and credit goes to all the team of Gadaar The Traitor and special thanks to Harbhajan Mann and Amitoj Mann.

In the end, we congratulate to the team of Gadaar The Traitor and hope will bring more for the cinema lovers