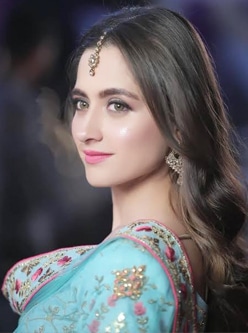 Sanjeeda Shaikh is an Indian television actress and has made her Punjabi movie debut with ‘Ashke’. The movie had released in 2018. She won the Best Actress Award in 2019. She has different nicknames like Sanji and Sanju. Her date of birth is December 20, 1984. And as per her Wikipedia, Sanjeeda Shaikh was born in Kuwait and she originally belongs to Ahmedabad, Gujarat. As per her family details, Sanjeeda has a brother who is younger to her in age. The name of Sanjeeda Sheikh’s brother is Anas.

Her marriage has taken place in 2012 and the name of Sanjeeda Sheikh’s husband is Aamir Ali. He was her boyfriend before. Sanjeeda did her television debut in 2006 with the serial named ‘Kyaa Hoga Nimmo Ka’. She did her Bollywood debut in 2003 with the famous movie ‘Baghban’. Her debut in the Punjabi song videos was with ‘Kalla Sona Nai’. Akhil is the singer of this song. Sanjeeda Sheikh moved to the Punjabi Entertainment Industry later on.