The controversy queen of Bollywood Rakhi Sawant who loves to be in news for the whole of the season & all kind of reasons is again back with a new masala hit. This time she had created a controversy in the wrestling ring, as a female wrestler made her getting hospitalized during the Continental Wrestling Entertainment (CWE) in Haryana. The incident happened at Tau Devi Lal stadium, sector 3 in Panchkula on Sunday, from where a video is going viral over the social media.

After winning a match, international female wrestler used to challenge all the Indian ladies standing over there to fight with her. In the reply of same, Rakhi Sawant enters the ring and challenged her to compete Rakhi in dance. After that, both of the ladies can be seen dancing on the tunes of music and giving hot moves & naughty looks. Suddenly, the female wrestler got exaggerated by the audience; also Rakhi can be seen making her angry. That makes the wrestler uncomfortable and she lifts her in the air and knocked her out cold mercilessly. 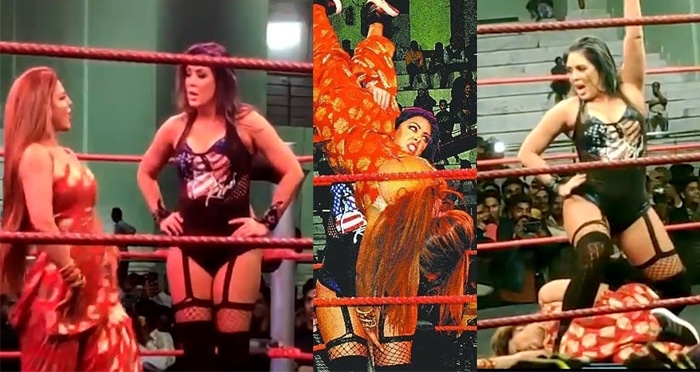 Rakhi lying in the ring goes unconscious. After seeing this, safeguards and security enters the ring and take out Rakhi for first aid, she told the organizers about having the pain in stomach and back. Thus she got hospitalized as well.

This is one new controversy by 39 years old item girl, though she remains in limelight for numerous reasons and weird incidents with various personalities. Recently she appeared in many of the press conferences and interviews against the #MeToo issue raised by Tanushree Dutta. Before that, she got headlines because of her friendship with Sapna Choudhary and Arshi Khan.