Under the banner of MN productions The short film ‘Proud to be Sardar’ has been written and directed by Rana Rangi. The producer of the movie is Vishaldeep Nagra and Ramanpreet Nagra. The cast of the movie is Rana Rangi, Tayi Surinder Kaur, Shivani Wazir, Dalbir Singh, Tejpal and Arman Arijit Singh. Executive producer and associate director is Sikander Singh and cameraman (dop) Malkit singh Bath. 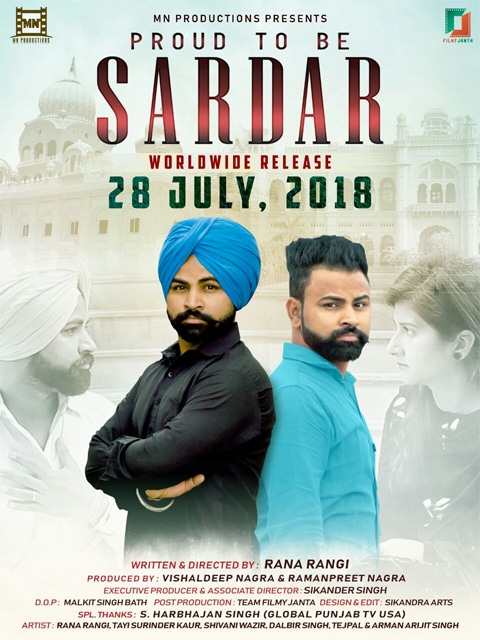 MN production have always promoted are presented those sought of short movies which gives motivational messages to the audiences. The production house has maintained the recognition in the industry through various short Punjabi films like “Pali” which was based on corruption, “Umran Di Sanjh” a story that was on how we should take care of our elders and the recent success of there short movie “Daristi” that was in hindi whose star cast was Mugdha Godse and Umang Jain. Directed by Jaswant Kheda as it was Khalsa entertainment movie. Drashti movie was appreciated by an award for outstanding achievement in international Calat film festival at Kolkata. Even it was shown at the Bangalore short film festival.

To continue the chain of records MN productions, producer Vishaldeep Nagra and director Rana Rangi are back with the short film titled as “Proud to be Sardar”.

The story of the movie evolves around a youngster who took wrong decision in his life. Due to which he lost his recognition and realized his that he has committed a sin. Where later he decides to earn back his dignity. The relationship between mother and son has also been portrayed in a beautiful way. “Proud to be Sardar” will be released worldwide on 28 July on YouTube.