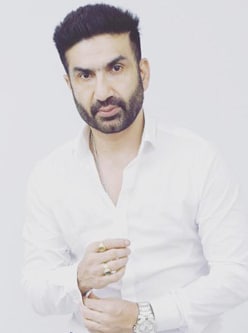 He is a famous Singer, Model, Lyricist and Actor who born on 31 March 1975 in Gurdaspur, Punjab. His Father name is Bachan Singh. He was married. He has two Sons Kirat Singh & Nidhan Singh. Preet Harpal used to visit Doordarshan Kendra, Jalandhar, Punjab office in his childhood to see his favorite celebrities. He used to write songs during mid-night in his drawing room. In 2009, he got famous with his super hit song Lock Up. Some of his Blockbuster Songs are – Yaar Berozgaar, Wang, Black Suit, Law, Kangna, Att Goriye, Queen Banja and more. Some of his Best movies are – Control Bhaji Control, My Self Pendu and more. Preet Harpal Debut album was Hasle Vairne Hasle. His Debut Film was Sirphire.