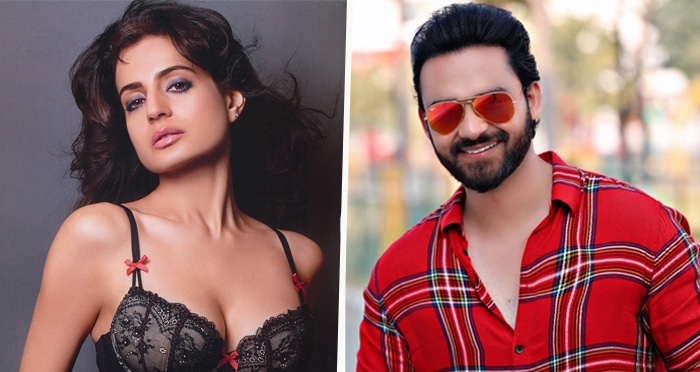 In the recent update, Punjabi actor-singer-director Nav Bajwa is gearing up to mark his Bollywood debut opposite Ameesha Patel. Earlier, the otherwise news floated across the internet where the actress named to make her Pollywood debut. Nevertheless, the latest update clears the air! Nav is preparing for his first-ever Hindi movie.

The Raduaa and Ishqaa fame actor Nav Bajwa is all excited to sign his Hindi debut film as the lead, opposite the beautiful actress Ameesha Patel. He took to his social media handle and shared the news with his followers. Also, the actor posted a picture with the actress and captioned it. He wrote, he’s coming up with a big Bollywood project and soon details will be out.

The details of the movie are yet to reveal. Once Nav said in an interview that it’s a beautiful script from the romantic-comedy genre. However, the reports foretell that the movie shoot will soon hit the floors.

Besides Nav, his swarm of fans is excited to see the actor rocking on the big Bollywood screen. Also, as soon as the news hit in, a series of congratulatory messages started streaming in. Well, we wish the actor all the success for his new beginnings!