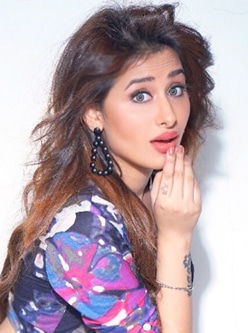 Mahira Sharma is a familiar Indian TV actress and model. Her nicknames are ‘Maahi’ and ‘Mau’. Mahira Sharma’s birthdate is November 25, 1997. She was born in Jammu and Kashmir. Her age doesn’t justify her acting talent. As per Mahira Sharma’s biography, she has 1 brother. The name of her brother is Akki Sharma.  Mahira Sharma’s father is a businessman by profession in Mumbai. Her mother’s name is Sania Sharma. She has been a part of different TV serials. Mahira Sharma’s debut was with the TV serial Y.A.R.O. Ka Tashan in 2016. Her character ‘Shilpi’ therefore, gained a lot of fans and much popularity. Subsequently, she acted in comedy TV serials and daily soaps also. Also, she has been a part of the Punjabi song videos like ‘Lehanga’, ‘Relation’ and ‘My Moon’. These songs have been opposite singers like Jass Manak and Amrit Mann. Also, Mahira Sharma was a part of the Colors TV Reality Show – Bigg Boss Season 13.