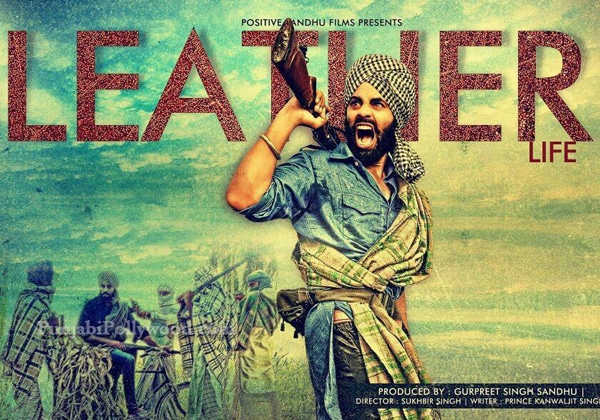 Punjabi movie “Leather Life” was released on 3 April,2015. All were waiting for the release of this movie with great excitement. Finally it was released this Friday. Movie written by Prince Kanwaljit Singh shows adverse days in punjab during 1984 in new way.

Now let’s talk about the movie.

Story
The movie Leather Life is the story of punjab in 1984-1990. Movie shows that during this era no one was able to speak in front of the politicians and police. This Movie is of a boy named Gurdas, who was enjoying his life but when police enters his life the life became adverse for him. Movie starts from Climax and full movie runs in a flashback. Romance of those days is also showed in this movie.

Acting/Directing
In this Film main role is played by Aman Dhaliwal and some where his overacting can be judged. Himanshi khurana has also done good job. Om puri’s role is of very short interval but most important. Other actors of this Film such as Karamjit Anmol, Harinder Bhullar,Deep brar,Ericka virk, Simran sehjpal, Gurinder makhna,Tarlochan singh and Prince KJ singh has also performed well. Somewhere in the Movie songs are added forcefully but the dialogues are very effective. In the second half of film some scenes are hard to understand. Due to some scenes of violence in the Film, the A certificate was issued late but there are no such type of scene in whole movie. This film is directed by Sukhbir Singh .The screenplay and direction in this Movie are done very carefully.

Music
Music of the Film is not up to the mark except. one or two songs and background sound is good but it could be made much better. Film contains various types of music according to requirement of story. Song of Nacchatar Gill is good but song Waqt by Karamjit anmol is the best as compared to all other songs in this movie.

Why to See ?
Story of this movie is concerned with politics of villages in Punjab. Although the movie does not contain any famous face but still the all artists of this film has done their best to entertain the audience. Every one seems excited to watch this movie that is why the shows of this movie are going housefull till date. All the best to the whole team of this movie “Leather Life” .