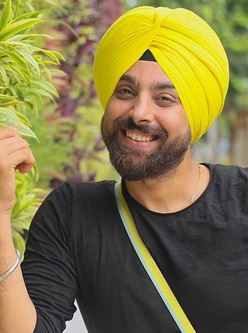 Kanwalpreet Singh is an actor who has worked both in Punjabi as well as the Bollywood Industry. His birthplace is Punjab and he has obtained his Masters’s qualification in the field of Business Administration.  His Punjabi debut was with a video that had been posted by Sukhshinder Shinda in 2010. And, in the same year, he participated in ‘Love Net’. This aired on Channel V. As per Kanwalpreet Singh’s biography, he was fond of movies since his childhood age. Kanwalpreet Singh has not discussed about his family or girlfriend publically.

He made his Punjabi movie debut with Bikkar Bai Sentimental in 2013. He has done other movies alongside actors like Neeru Bajwa in Naughty Jatts in 2016. Interestingly, Kanwalpreet Singh has made his Bollywood debut as well. He is a part of movies like ‘Mastizaade’ and ‘Tutak Tutak Tutiyan’. Both released in 2016. He also has starred in director Imtiaz Ali’s ‘Tamasha’, along with Ranbir Kapoor in 2015.