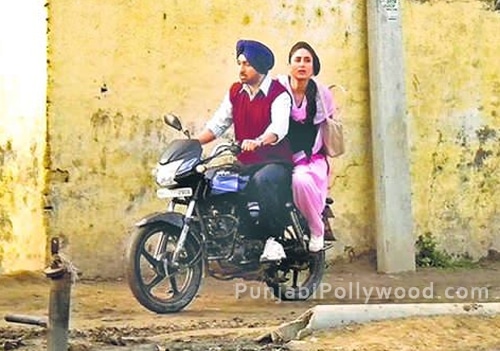 Diljit and Kareena On Bike

Popular Kareena Kapoor Opposite Diljit dosanjh Started shoot few days back for the upcoming movie Udta Punjab in Amritsar,Punjab. Before the rumors were that Udta Punjab Cast discarded the movie due to some reasons but now the scenario is different and Punjabi Singer and actor Diljit Dosanjh is doing shooting with Kareena where both performed some acts for the movie in Attari Sector near Amritsar. While shooting scene Kareena Kappor got slipped in muddy area from bike with diljit but later both were under control and carry forwarded with scene.

The highlighted cinematic was she wore Punjabi dress and looking adorable while shooting in red color Punjabi suit whereas Diljit dosanjh evergreen looks in blue turban made his day with hot Bebo. On the other hand, Kareena kapoor said that she liked the weather at Amritsar which is far similar to other cool states in India. Bollywood Movie Udta Punjab will shoot in different parts of the punjab which is based on the present condition of punjab villages and cities.