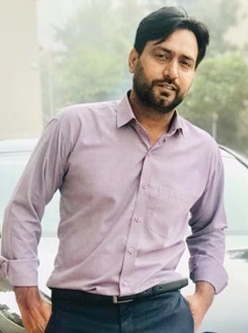 Amberdeep Singh is a successful Screenplay Writer, Dialogue Writer, Director and Actor. He was born on 13 December in Abohar, Punjab. He completed his Bachelors of Commerce, Masters in Theatre and Television from DAV College. He is married to Amandeep Kaur. His son’s name is Lakshjeet and daughter’s name is Sahebjot. Amberdeep Singh started his career in 2007. After his post- graduation, he moved to Mumbai for making his career in film industry. According to him, writing is in his blood as his father was a journalist so he was also interested in writing since his childhood. Apart from comedy shows, he also wrote the scripts of very successful Punjabi movies such as Goreyan Nu Daffa Karo, Angrej, Happy Go Lucky, Love Punjab, Sarvann, Lahoriye and many more. In 2013, he won PTC Award for ‘Best Dialogues’ for the movie Daddy Cool Munde Fool. In 2018, he worked as a lead actor alongside Neeru Bajwa and Ammy Virk in the movie Laung Laachi which was also his debut film as an actor.